Like other post-industrial or legacy cities in the United States, such as Detroit and Cleveland, New Orleans has garnered attention for its boom in urban agriculture over the past few years. While the city has historically boasted a backyard gardening culture, along with a surge of community gardening movement in the 1990s, commercial and non-profit gardens became more prevalent in the years following Hurricane Katrina in 2005. There were over 100 urban gardening and farming projects in the city as of 2014, with growers engaging in a wide range of agricultural activities from growing vegetables and flowers, planting fruit orchards, keeping bees to raising chickens and goats.

One of the promises of urban agriculture (UA) in cities that have long suffered from a large stock of vacancy, such as New Orleans, is that it could convert previously blighted lots into productive, aesthetically pleasing spaces. This could reduce crime, raise property values, and even improve local eco-system. Some policy makers and activists have posited urban agriculture as a solution to the large supply of vacant and abandoned properties in the city. Local and state government agencies in New Orleans, with some cooperation from local nonprofit organizations, have implemented blight and land use policy and programs promoting urban cultivation in recent years. However, there is little empirical exploration into the types of properties that are available and accessible to urban growers and the factors that impact long-term success of their operations.

So, how do urban growers gain access to vacant lots for cultivation activities and what challenges do they face in the process? To answer this question, we interviewed 44 urban growers in New Orleans, focusing on the ownership of the land where they grow and varying modes of initial access to space for farming: publicly- versus privately-owned and purchase versus lease. We found that the most prevalent form of land access is through leases from private landowners (see Table 1). Growers reported that these leases were generally the easiest to negotiate and provided the fewest restrictions on farming activities. While private leases were generally easier to obtain, purchasing from a private landowner can prove challenging due to multiple-party ownership or back taxes often associated with vacant properties in the city. That being said, growers reported that purchasing or leasing from a public entity requires knowledge of bureaucratic processes and, in some cases, a willingness to accept restrictions on the use of the property. 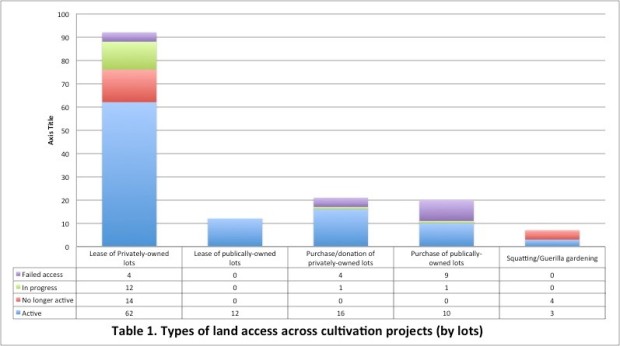 On the whole, these results indicate that the availability of vacant lots does not necessarily translate to their accessibility for urban cultivation: In short, not all vacant urban spaces can be converted to gardens or farms. Various urban policies and programs for urban farmers have substantial obstacles and barriers, while private leases and purchasing programs have their own issues and concerns. Furthermore, not all lots are appropriate for urban agricultural activities, even if the city is supportive of these projects. Growers pointed out that their selection of potential sites is influenced by some inherent characteristics of a lot, such as sunlight, existing infrastructure for farming, and proximity to a grower’s home, social mission, or work.

Our findings call into question the long-term viability of urban farming projects in New Orleans, due to a dynamic real estate market and insecure land tenure. While this is a case study of New Orleans, an increasing number of cities are looking to implement tax incentives in efforts to promote urban agricultural use of vacant or blighted lots. This study offers insights into the potential as well as the limitations of these policies. Providing tax incentives could encourage more private owners to pursue these uses of land. But as long as these lots remain on lease terms without a clear pathway to ownership or security of long-term lease, the programs place the burden of risk and resources of developing a garden or a farm onto the shoulders of individual growers, who could lose their access just as soon as the land value rises. These programs are also unlikely to convert the least desirable lots into gardens, as these lots typically pose the biggest challenges in establishing access, and often located in the areas that growers may not wish to cultivate.

Post-Katrina New Orleans is joining other post-industrial cities in embracing green and blue infrastructure, but this new form of green conversion through urban agriculture may have political ecological implications that warrant further research. As we have seen, the current urban agriculture policies do not automatically result in creating accessibility to land for cultivation and we do not yet know who are most likely to benefit from these policies and programs. With an increasing number of local and state governments implementing policies to promote urban agriculture, it remains to be seen why and how some projects may survive and what impacts it may have on surrounding communities.

Additional steps by policymakers are needed to ease access to land, including forgiving property back-taxes, providing a clear and concise process to obtaining leases or purchasing available land, as well as expediting the leasing or purchasing paperwork. Furthermore, there may need to be additional incentives for the growers to lease or purchase lots that are the least desirable. Community ownership and management of cultivation projects ensure long-term sustainability of these projects, and could work effectively in conjunction with the government policies to facilitate the growers’ access to vacant lots, though such effort is contingent on the community valuing urban cultivation activities as an asset. On the part of growers, this study demonstrates that they need to be mindful of the limitations of each type of land access, determining the types of investments they should make in the land as well as what type of land and land tenure they need for their specific project. Future research needs to more closely examine who is most successful in taking advantage of these new programs to establish what kinds of urban gardens and farms, and the long-term economic and social impacts that these “green conversions” have on the surrounding community.

To read the full article that this piece is based on, click here.

—
Yuki Kato is an Associate Teaching Professor at Georgetown University