Against the backdrop of increasing immigration dispersion and ongoing stalemate over federal immigration reform, many local governments have taken immigration matters into their own hands. While opposing approaches to undocumented immigrants (anti-immigrant policies versus sanctuary ordinances) are observed in many municipalities, a new type of local immigration policy has emerged recently, which shifts from a focus on the basic rights of undocumented immigrants to a recognition of immigrant contributions to community development: welcoming cities.

A growing number of localities have adopted a combination of immigrant welcoming, integration, and economic development initiatives. This new type of local immigration policy differs from previous immigration policies in its emphasis on the economic incorporation of immigrants and the broad scope of programs offered to achieve such goals. As of July 2015, 50 cities from 31 states had formally joined the Welcoming America network and labeled themselves as “welcoming cities.” Many of these joining cities are located in America’s heartland, struggling with decades of population loss and economic decline. They seek to capitalize on the new human capital of immigrants by better attracting and integrating them into the local economic fabric. Notable programs include St. Louis’ Mosaic project, Global Detroit, Welcome Dayton, among others. 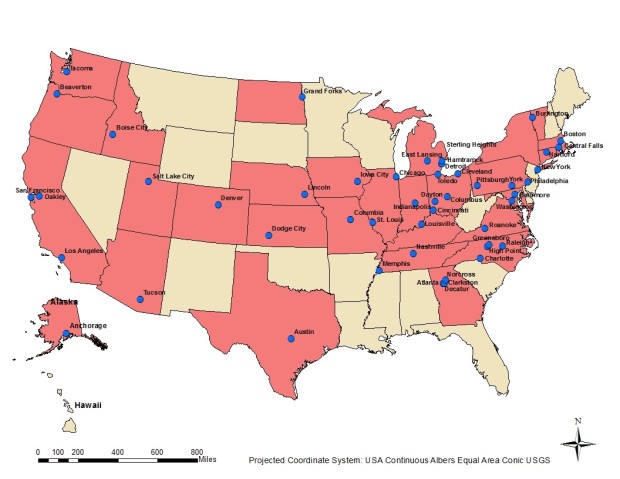 In this paper, we examine the adoption dynamics of cities that have joined the Welcoming Cities initiative to understand why municipalities undertake such a new approach to immigration policy. We find that cities that have an educated, diverse and liberal population, are more economically troubled, but are fiscally sound are more likely to become welcoming cities. The Welcoming America as an umbrella organization also plays an important role in facilitating the welcoming movement. Therefore, we argue that economic adversity predisposes localities to the new immigrant integration policy as an economic development strategy. Indeed, our data reveals that cities with lower median household incomes are more likely to become welcoming cities.

As the welcoming cities initiative continues to expand its reach to many more jurisdictions, we believe that more research on the rationales of such policy adoption can help us better design and implement these initiatives and then ultimately evaluate their effectiveness over time.

Xi Huang is a PhD candidate in the joint doctoral program in public policy at Georgia State University-Georgia Institute of Technology. Her research interests include immigration, race/ethnicity, and poverty.

Cathy Yang Liu is an associate professor of Public Management and Policy in the Andrew Young school of Policy Studies at Georgia State University. She has published widely in areas including community and economic development, urban labor markets, immigration and entrepreneurship. She holds a PhD in Urban Planning from the University of Southern California and currently serves as a managing editor for Journal of Urban Affairs. Her professional website is: http://aysps.gsu.edu/profile/cathy-yang-liu/.

Series: What Trump Should Know