During this latest and most brutal of hurricane seasons, the real estate website Zillow.com offered that hurricanes typically had no impact on property values in the coastal areas most often impacted by such storms. Yet the website also cautioned that “Whether or not this holds true in the wake of Harvey and Irma remains to be seen.”

Indeed, what ostensibly might affect coastal property values is not hurricanes per se, but rather the fact that increasingly severe storms are just one of the more obvious facets of the multiple impacts climate change will have on coastal communities. Thus while Zillow’s analysts contend that hurricanes haven’t historically affected property values, they have also calculated that estimates of sea level rise from the National Oceanic and Atmospheric Administration suggest that 1.9 million homes in the US will literally be under water by 2100, leading to a projected loss of $882 billion in property value – though it seems likely at least to this layperson that much of the property value will be lost well before the properties are actually submerged. The areas expected to lose the most in property value are coastal cities such as Boston, Honolulu, San Diego, New York, and Miami. 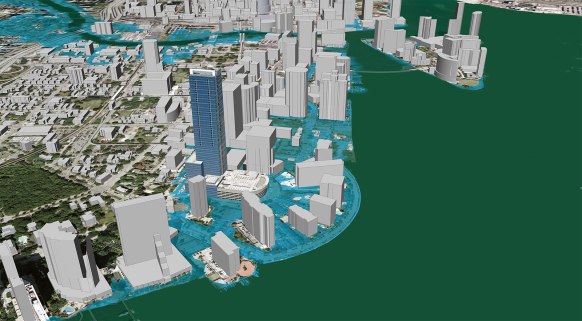 In the study of urban politics, the coalition of actors with the greatest vested interest in a city’s property values is often referred to as a “growth machine,” a term coined by sociologist Harvey Molotch in 1976 that has come to be one of the more widely used analytical frameworks in urban studies, including recent articles in Urban Affairs Review. The key actors in growth machines are typically large-scale land developers and owners who reap more profits if there is more demand for land, typically generated by population growth. Large-scale landed interests will join forces with the city’s booster coalition, such as the local newspaper, chamber of commerce, and the mayor, in efforts to attract new companies to create more jobs and thereby attract more people. Thus, for instance, Amazon’s recent announcement that it was looking for a location to build a second headquarters for up to 50,000 new employees sparked growth machines into action to promote and put together packages of tax breaks and other incentives in an effort to lure the online behemoth to move to their city.[4]

Not all cities have growth machines – wealthy, primarily residential municipalities especially often actively thwart growth. And in cities in which there are enough elites who act collectively in pursuit of growth to enough of an extent that they qualify as a growth machine (and what the threshold is to qualify as a growth machine has never been clarified in the literature), the specific mix of different elites, and thus interests, will vary. Moreover, in different cities different groups have more or less power to either facilitate or thwart land development, depending on such things as requirements for community approval or the ability to circumvent the zoning code.

If the composition and power of growth machines varies in different cities, the extent to which growth machines in different coastal cities will view the multiple problems stemming from sea level rise as a threat to their shared interests, and their specific responses to that threat, will also vary. Yet we can at least understand these responses as lying along a continuum. At one end of the continuum, a proactive growth machine can double down on its initial land investment and invest further in things such as bulkheads, sea walls, flood gates, and water pumps. At the other end, a growth machine might simply cut its losses, disband, and cease further investment.

This appears to be largely the case in Miami, which is often identified as that American city perhaps most threatened by climate change, but which has also planned for major infrastructure investments that specifically address the impact of sea level rise, most notably the $400 million “Miami Forever” bond issue that will go before voters in November.[5] One notable indication that the Miami growth machine is taking a proactive stand on investing in seal level rise is that, this past summer, the Greater Miami Chamber of Commerce hosted its second annual “Sea Level Rise Solutions Conference.”

Miami has over the past decade also experienced a major building boom, reflected in a population that has increased from approximately 400,000 in 2010 to slightly more than 450,000 today. Of all the many reasons that people move to Miami, the city’s planned infrastructure investments in response to sea level rise may well not be at the top of the list, though there is some evidence of increasing demand for housing higher above sea level (which in many instances is where the city’s lower income and largely Black neighborhoods are located, leading to a new notion of “climate gentrification”). Regardless, a proactive response to sea level rise suggests a vibrant and optimistic growth machine intent on maintaining and building on its investments rather than dis-investing.

Alternately, enough growth machine members might disinvest so as to signal to others that they should also disinvest, leading to a downward spiral. This may well be the case in Norfolk, Virginia, where the impact of rising sea levels is already clearly evident, but city officials have been notably skeptical about their ability to make investments in response. As one Norfolk councilwoman put it in 2014, “When we’re talking about floodgates and building bulkheads, then you’re talking about the big bucks that even the feds don’t have. And then you’re competing with New York, Miami — even Hampton.” Notably, in contrast to Miami, Norfolk’s population has essentially stagnated at a bit over 240,000 since 2010. The regional chamber of commerce recently engaged in its first forum on sea level rise, though it was sponsored and hosted by Old Dominion University. What economic activity there is in the city in response to sea level rise appears to be such things as somewhat pathetically optimistic news accounts of a potential market for residential flood mitigation contractors.

My brief and largely superficial comparison of Miami and Norfolk hints at a hypothesis that the ability of coastal cities to confront the challenges of sea level rise depends on the preexisting capabilities of its growth machine. In the absence of a political coalition willing to plan for major public infrastructure investments, a city will ultimately face a downward spiral of disinvestment, a decreasing ability to pay for infrastructure improvements, and depopulation. Norfolk does not perfectly fit this mold – as the home of a major naval shipyard it has a highly stable employment base which would mitigate against a downward spiral, but at the same time it appears to have a lackluster growth machine (which perhaps doesn’t even qualify as such) that has expended little effort in seriously addressing perhaps the city’s greatest challenge, and this lack of dynamism is ostensibly reflected in a stagnant local economy.

At the far other end of the spectrum is New York, which like Miami and Norfolk faces some of greatest challenges of sea level rise, and which in 2012 was hit by Hurricane Sandy, causing $19 billion in damages in the city alone. In response, New York used part of its federal aid package to initiate a dramatic coastal resiliency program, originally named the “BIG U” and now known as the “Dryline,” which has been described as a “the sexy proposal that wowed both architects and the bureaucrats at HUD.” The overall plan calls for systems of green infrastructure that will provide dramatic new amenities across much of the city’s massive waterfront.

In short, one of the largest challenges facing coastal cities in the US and elsewhere is sea level rise, and one of the greatest impacts sea level rise will have is on cities’ property values, which will affect tax revenues and the ability to provide public services. Cities can either shrink from this challenge and face disinvestment and depopulation (as possibly is the case of Norfolk), meet the challenge so as to sustain property values (as in the case of Miami), or innovate around the challenge so as to possibly enhance property values (as in the case of New York). I have speculated here that one key factor that will determine a city’s response is the relative power and dynamism of its growth machine. Actual research could provide some evidence for these speculations, and might further clarify the utility of the growth machine as an analytical tool.

—
Richardson Dilworth is Professor of Politics and Director of the Center for Public Policy at Drexel University. His research and teaching focuses on American urban political development, urban environmental policy, and community economic development. He is the author and coauthor of numerous essays and articles, author of the book The Urban Origins of Suburban Autonomy (2005), and the editor or coeditor of seven books, one of the more recent being The CQ Press Guide to Urban Politics and Policy in the United States (2016), with Christine Palus.