By David Switzer (University of Missouri)

I argue that the political incentives facing local governments mean that those serving more liberal and Democrat leaning citizens will comply with environmental law at higher rates than those serving conservative and Republican leaning citizens. In general, there is strong evidence that more liberal and Democratic leaning individuals are more concerned with environmental protection and may be more aware of pollution issues. This means that cities that serve more liberal citizens may face greater political backlash for poor implementation. Additionally, cities that serve more conservative constituencies may struggle to raise the revenue necessary from environmental compliance. To be clear, the argument here is not that conservatives do not care about environmental protection, but rather that the political incentives facing local governments mean those that serve more liberal citizens are incentivized to comply at higher rates. 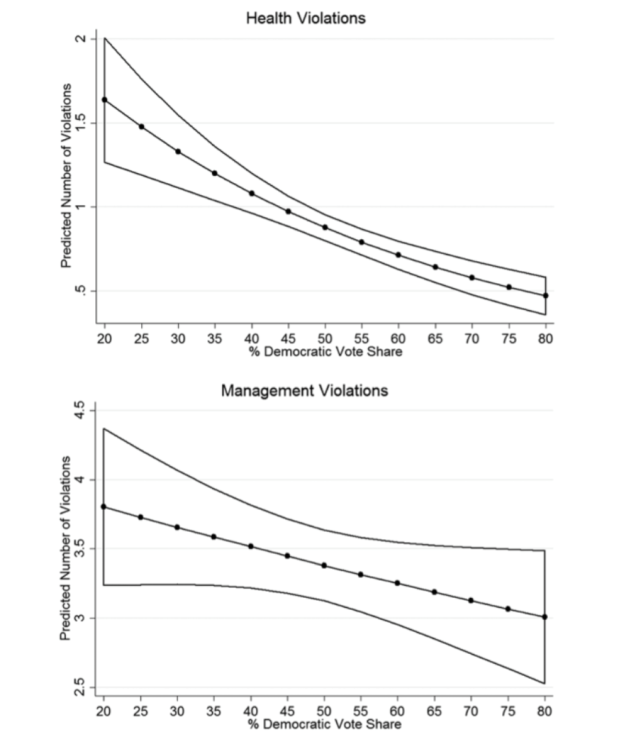 Testing this possibility on municipal water utility compliance with the Safe Drinking Water Act, I found that municipalities serving areas with a higher Obama share of the major party vote in the 2008 presidential election committed far fewer violations of the Safe Drinking Water Act from 2009 to 2013, even after controlling for a number of demographic, institutional, and utility characteristics. This means that much like federal and state environmental policy implementation is dependent on political variables, local compliance with federal law is determined by local politics. Specifically, citizen partisanship at the local level in part determines municipal compliance with federal law meant to protect citizens from harmful contaminants in their drinking water.

While the Trump administration will likely prompt scholars to increase their attention on state implementation of federal environmental policy, these results, coupled with the human health disaster in Flint, should encourage those interested in urban politics and environmental policy to explore the ways in which local governments may vary in their compliance with environmental law. It is time to fully embrace that there are three, not two, levels of government involved in the implementation of many of the federal environmental statutes in the United States, and look deeper into the role played by local governments in shielding citizens from pollution.

Photo by The Climate Reality Project on Unsplash

David Switzer is an assistant professor at the Truman School of Public Affairs at the University of Missouri. His research lies at the intersection of political science, public policy, and public administration, focusing on how political, administrative, and community characteristics influence environmental policy development and implementation at the local level.